Aerobics came to the USSR

Acid leggings and woolen leggings were among the indispensable attributes of perestroika women's fashion. This is due to the TV broadcasts of aerobics, called rhythmic gymnastics in the USSR.

The first broadcast took place back in 1984, and the program was broadcast on the USSR Central Television until 1990 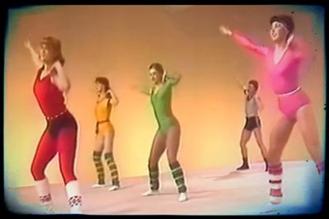 Thrash introduction that accompanied the start of aerobics classes (in Russian)

The popularity of teleaerobics had several reasons. First, of course, the interest of Soviet women in an elegant, new and sporty way to lose weight. For practicing rhythmic gymnastics, it was not nesessary to go to gym, it was enough just to turn on the TV at the certain time. Stadiums, glowing geometric shapes and lawns with birch trees served as the backdrop for classes (in television broadcasts).

VCRs in the late 80s are still a rarity in the USSR and a cult object, therefore, for the majority, recording was impossible. However, it was possible to recorded only sound on a tape and then practiced on your own using only the sound track.

The time frame of 30 minutes was chosen as the optimal duration. On the one hand, such a duration made it possible to achieve the required muscle load, but at the same time, half an hour was not so difficult challenge for beginners. As the name implies, the purpose of these exercises was to increase aerobic loads, i.e. loads in which oxygen becomes the main source of energy for the muscles. For example, running or cycling.

An additional advantage of such activities was the simplicity of the elements. Indeed, those who wanted to practice were not required to do any difficult tricks, rather hard work in the process of performing a simple but one-type movement multiple times.

Before the start of classes, the facilitator sometimes gave recommendations on how to prepare for training, namely, put on a tracksuit and ventilate the room.

Women from 30 to 55 years old were the main target audience of the program. Here is how one of the editors Ivanitsky describes the target audience: " We found out that our rhythm is most needed by women from 30 to 55 years old with children. For them, our lessons were just a salvation. There are not enough gyms, sometimes it is not close to go to them, and they are not everywhere. Someone is embarrassed to study in a group, but everyone still has work, shops, laundry, children. In short, there is no time. And this TV half hour is irreplaceable for them ". 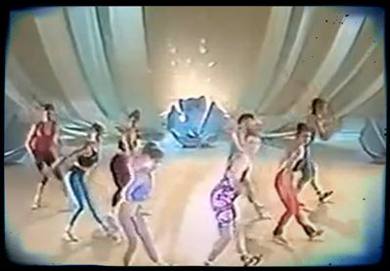 At the end of the 80s, the best gift for March 8 (International Women's Day) was the aerobics vinyl disc with voice guidance

Book: Aerobics and Us

In the book " Aerobics and We " the philosophy of a healthy lifestyle itself and the scientific validity of various exercises are examined. Provides medical statistics such as life expectancy, number of smokers, percentage of overweight, etc.

Despite the fact that the book is from 1990, it touches on the insanely relevant topic of proper nutrition today and provides ways to measure a certain " normal body weight ".