The first McDonald's in the USSR

January 31, 1990 on Pushkin Square in Moscow, has been opened the first McDonalds in the USSR. For millions the Soviet people that was a cult event. By the way, that McDonald's is still the largest in Europe - 900 seats. 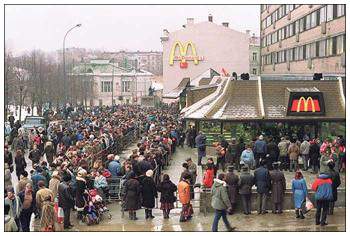 For the citizens of the Soviet Union, McDonald's was not just eatery, it was a symbol of tempting western life. That's enough to look at the photos of that day, captured the huge queues.

According to some estimates, during the first day firs soviet McDonalds has served 30,000 people. In the evening news soviet tlevision described the event as "opening the doors to a food competitor" 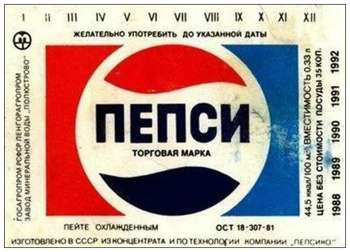 In 1990-s the Soviet economy had the strongest shortage of food and products. The shelves of grocery stores were empty. At that time in the capital of the communist commonwealth appears eatery, where you can always see an assortment of food. Prices are higher than in the stores but there real is meat to buy. 1 humburger cost 1, 60 rubles. (Avarage salary 260-290 rub.) That was an unaccustomed situation for the Soviet people.

That restaurant was the only in the USSR. Next restaurants in Moscow has been opened in 1993. In 1996 the first McDonald's has been appeared in Saint-Petersburg